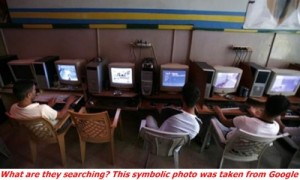 By Mahmud Moni :: Sadman (pseudonym), a class nine student of Bangladesh capital’s renowned school. This boy used to get a bit more advantage to his parents as he is the only son of this family. He has been getting plenty gifts – latest model Smartphone, laptop and other new technology stuff. Sadman has a very few human friend but a good number of virtual friends. His parents engage with their respective service for most of the time and the lonely boy had a little scope to be with them. So that he built up a deep relationship with the virtual world. Applying social media that included Facebook, Twitter, search engine Google, now Sadman became an internet expert. But he spends most of his time on the adult sites that attract him so much rather than any other things. Gradually, the school boy became a porno addicted but no one of his family could not even imagine this reality.

Sadman is not any exceptional case; it became a common scenario in the posh areas of the country.  So that the number of children-crime incidents has been rising sharply. Family members as well as the law enforcers have no control on the teenage girls and boys.

Nazmul Ahsan, father of a high official of a multi-national organization was puzzled while he was asked about his child. Responding to a question, Mr. Ahsan was saying, as me and my wife are service holder and he has no relative to be with him. Sadman finds his friends in toys, machineries and social media, especially Facebook and YouTube channel. We never imagine that my son can be engaged in such a habit. We are totally hopeless as he started smoking and sometimes drinking. But, we, proud fully shared with our friends and near and dear ones that our child is becoming a computer engineer as he can operate any program of a computer, smart phone.

Because of the young age – it is really important chapter in their life, he added.

Professor of Sociology at the University of Dhaka and the Information Commissioner Dr. Sadeka Halim said, family members, especially parents have to play a leading role to prevent and protect their children from pornography. They need to monitor frequently their children what topic the children are browsing, what are watching and what are they doing

The free sex-show in different kind of pornography is the main reason of children’s crime.

She said, we need to be more aware and careful about pornography and our children’s activities. To protect them from this type of bad culture we have to aware our young generation.

Everybody knows that who are using the internet all over the world, maximum is young. And expert says that the search keywords are searched by teenagers. Not only Google AdWords but also internet experts, social activists, school teachers including guardian said that the trend of pornography searching by internet raising high among the young people in Bangladesh. They have a lot of case studies about this issue. Experts think that this is one of the alarming things for teenagers of Bangladesh also.

In that condition, expert opinion is, the guardian has to manage their kids computer or device how these things could be safe. Experts said, guarding can arrange it by ‘safe browsing’ by installing some software. It is not possible to cut the internet connection because, this is a source of the unlimited knowledge. But safe browsing can save their beloved kids.

You can reach the writer at his FB: https://www.facebook.com/mahmud.moni